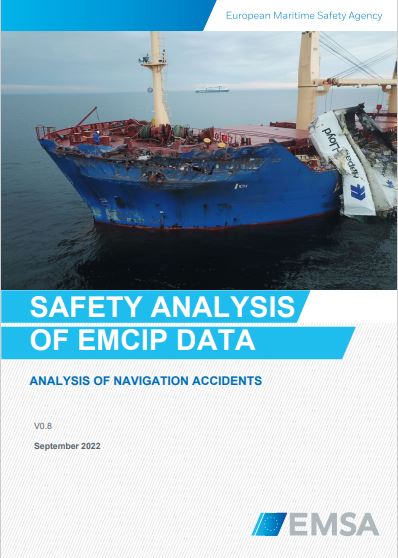 This safety analysis of the European Marine Casualty Information Platform (EMCIP) data focuses on navigation accidents (i.e. collisions, groundings and contacts), given their visibility and relevance in the context of maritime safety. In particular, a significant amount of occurrences involving navigation accidents have been reported in EMCIP, covering around 28% of the overall dataset. The EMSA methodology has been applied to detect potential safety issues reported in the system, focusing on the “human element”. The analysis considered different types of vessels such as passenger ships, cargo ships and service ships.

The document offers a high-level overview of the safety issues reported in the system between 2011 and 2021 and considers the remedial actions suggested to prevent similar occurrences in future, either safety recommendations (SR) proposed by an Accident Investigative Body (AIB), or autonomously taken by the relevant parties. The deliverable consists of the following documents:

Learning from Accidents through EMCIP