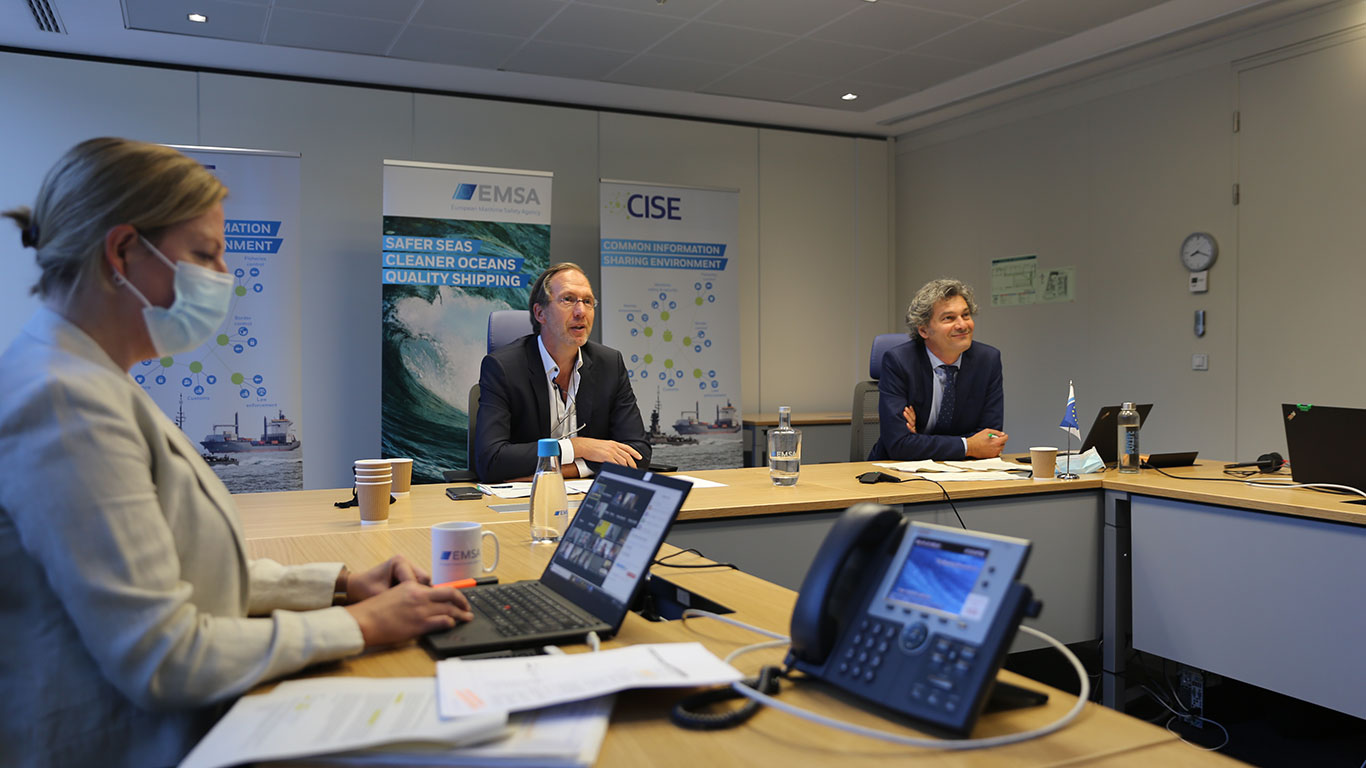 Information sharing as a key to the enhanced awareness and responsiveness at sea and the role of CISE in the future of maritime surveillance were the main points discussed during the workshop held on 21 May 2021. The workshop was organised by EMSA and DG MARE in the framework of the European Maritime Day 2021 (EMD) online conference and attracted more than 120 participants from various countries and sectors.

The EMD is an annual event providing a forum for discussions on maritime affairs and sustainable blue economy. EMSA was invited to present the current state of play of the transitional phase of CISE and the evolution from a research project to a fully operational information sharing environment for the maritime domain. The workshop therefore provided an excellent opportunity for everyone interested in maritime surveillance information sharing to learn about the role of CISE in this area.

In the opening remarks, Mr Christos Economou, Deputy Director and Head of Unit at the European Commission’s DG MARE, underlined that CISE will play an important part in the efforts towards more secure and sustainable seas around Europe and beyond. In this context, he referred to the European Maritime Security Strategy Action Plan and the recently published Communication on Sustainable Blue Economy. Both documents mention CISE and its role in fostering the maritime information exchange across borders and sectors and thus in contributing to a safe and secure maritime space.

During the workshop a new video on CISE was launched by Mr Leendert Bal, the Head of Department at EMSA and the Chairman of the CISE Stakeholder Group (the video can be found under this LINK). In his presentation, Mr Bal talked about the main features of CISE and its added value for the maritime surveillance domain. He also elaborated on the main goal of the CISE transitional phase which is to become operational by the end of 2023, after a set of conditions is met.

One of the highlights of the workshop was the active participation of the Member States already involved in the CISE project. Dr Elise Kleinsorgen, Legal Officer at the German Federal Ministry of Transport and Digital Infrastructure, explained why CISE should be considered as a key instrument in ensuring effective cooperation across sectors and borders in order to obtain the full maritime picture. Mr Henk Rohaan, Senior Adviser at the Netherlands Coastguard, described a complex situation at the extremely busy North Sea and how CISE could address the increasing need for improved cooperation and information sharing at national and international level. Moreover, representatives of Spain, Bulgaria and Finland shared their views on the benefits of being part of CISE and why now is the time to join the CISE network.

The workshop was concluded with the speakers’ reflections on the future perspectives of CISE and where we could stand in 2027, hoping the CISE will become an indispensable tool used by all the European authorities involved in maritime surveillance. At the end, the participants could propose and vote for the new CISE motto, choosing “Share. Decide. Respond.” as the one describing CISE in the best way.

All the material from the workshop, including the poll results and presentations, can be found under the Meetings and workshops section HERE.