An accident occurred on 10 August 2011 on the Gannet F platform, approximately 176 km east of Aberdeen. The accident caused an oil spill of 200 metric tonnes. In the following days, efforts were made to control the leak but were not successful. On 16 August 2011 the UK‘s Maritime and Coastguard Agency (MCA) made a request for emergency satellite support from EMSA. The monitoring entailed daily coverage of the accident area and included nine high resolution radar images and eight high resolution optical images over the area of interest, with the first image being delivered on the same day of the request. On 21 August 2011 it was reported that the leak was contained and the monitoring was officially closed on the 24 August 2011. 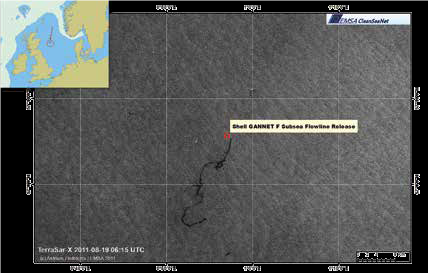 Image showing the leak from the Platform Gannet F